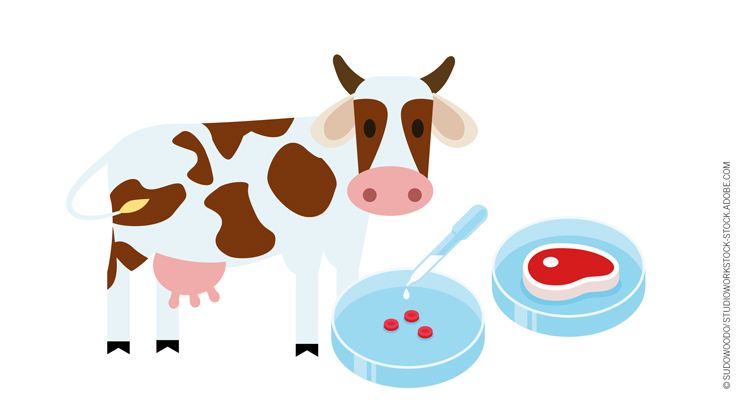 The investments are fueled by the recognition of a growing worldwide demand for high-quality protein and increasing consumer preferences for environmentally friendly and sustainable food production. And while the market for clean meat and plant-based protein products is projected to remain small in comparison to traditional beef, pork, and poultry, the efforts clearly have the meat industry worried.

The U.S. Cattlemen’s Association (USCA), a leading trade group, has filed a petition with USDA’s Food Safety and Inspection Service (FSIS) requesting the agency officially limit the labeling of “beef” to “cattle born, raised, and harvested in the traditional manner… rather than coming from alternative sources such as a synthetic product from plant, insects, or other non-animal components and any product grown in labs from animal cells.”

Similarly, “products that are labeled as ‘meat’ should be limited to those that are derived from the tissue or flesh of an animal harvested in the traditional manner,” USCA said in its 15-page petition, submitted in February.

“Consumers depend upon the USDA FSIS to ensure that the products they purchase at the grocery store match their label descriptions,” said USCA President Kenny Graner, who asked the agency “to rectify the misleading labeling of ‘beef’ products that are made with plant or insect protein or grown in a petri dish.”

Similarly, the National Cattlemen’s Beef Association, another major trade group, has made the issue a priority in 2018, with “a focus on protecting the industry and consumers from fake meat and misleading labels on products that do not contain real beef.” The group is reportedly in discussions with USDA and FDA, as are representatives of companies developing these products.

The regulatory boundaries are somewhat vague. While FDA has purview over most food products, USDA has primary authority over meat, poultry, and most egg products. And FDA, not USDA, is typically involved in labeling disputes. While not commenting on the labeling issues, FDA said: “Given information we have at this time, it seems reasonable to think that cultured meat, if manufactured in accordance with appropriate safety standards and all relevant regulations, could be consumed safely.”

An FDA spokesperson added the agency was “committed to supporting innovation in the food supply” and encouraged manufacturers to “engage with us to address any questions they may have.” It isn’t clear when, or if, FDA or USDA may weigh in on the controversy, but neither is likely to rule on clean meat terminology until the technology is more fully developed, concludes a recent whitepaper from CoBank, a national cooperative farm bank based in Colorado.

The beef industry’s opposition to clean meat is “shortsighted” and “disappointing,” says Emily Byrd, communications director for the Good Food Institute, a nonprofit that supports creation of “a healthy, humane, and sustainable food supply.” Plant-based and clean meat “have the potential to fundamentally transform meat production for the better,” she adds. “It’s up to the industry whether they will align themselves with this change and share the benefits, or fight this change to their detriment.”

Plant-based meat substitutes made from soy, nuts, and grains have been around for decades. Long a staple of vegetarians and the health-conscious, the segment is now becoming more mainstream, thanks to efforts by startup companies such as Los Angeles-based Beyond Meat, whose plant-based burgers, sausages, and chicken strips are so meat-like they can often be found in the supermarket meat aisle. In 2016, Tyson Foods took a 5 percent ownership stake in the company, followed by an additional investment last year.