And while he accomplished that seminal work in the 1960s and 1970s, Dr. Nelson believes it’s just as relevant today as the world faces future food shortages. “We’re looking at having to double food by 2050,” he said, reiterating a 2009 estimate from the U.N.’s Food and Agriculture Organization. “And that’s not just producing more. It also involves storage and processing.”

Memories of the tomato spoilage losses, which amounted to 10% to 20% of the crop, prompted Dr. Nelson to look for a solution. At 15, he was introduced to Purdue University’s extension system after winning that organization’s 4-H award for the 24 perfect tomatoes he had entered at the Indiana State Fair, according to biographical information provided by Purdue in 2007, when he won the World Food Prize. His 4-H accomplishment earned him the title of “Tomato King.”

Born in 1934, Dr. Nelson earned his bachelor’s degree in general agriculture from Purdue in 1956. He returned home to Morristown, Ind. and became plant manager of the family-owned tomato cannery, Blue River Packing Co., according to information released in 2010 by Purdue when it renamed its food science building after Dr. Nelson. When his father Brainard closed the cannery in 1960, Dr. Nelson worked for a time on the family’s 500-acre farm, raising hogs, corn, and beans. He then returned to Purdue, where he was offered a paid assistantship in horticulture, which he accepted to support his wife, Sue, and their daughter. He earned his doctorate in 1967; the Tomato King’s dissertation topic focused on the volatility of flavor in canned tomatoes.

He considered positions in the food industry, interviewing with several companies in New York, Chicago, and other cities. On a flight to an interview, Dr. Nelson sat next to the dean of Purdue’s College of Agriculture, Earl Butz, PhD, who later served as U.S. Secretary of Agriculture under Presidents Richard Nixon and Gerald Ford. Dr. Butz advised Dr. Nelson to consult with him first before making a final decision about working in the private sector. When he did so, Dr. Butz offered Dr. Nelson a tenure-track faculty position at Purdue, which led to his 50-year career at the university. 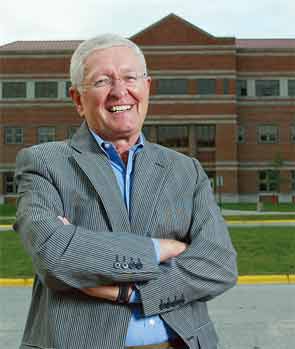 A chance meeting with the then-Dean of Purdue’s College of Agriculture led to Dr. Nelson’s 50-year career at the university.
ad goes here:advert-3
ADVERTISEMENT
SCROLL TO CONTINUE

Early on, Dr. Nelson understood the importance of collaborating with industry, as he focused on trying to eliminate the seasonality of commercial processing and packaging, as well as post-harvest spoilage. He worked side by side with equipment manufacturers in the private sector to design and build the tanks, valves, filters, and flexible bag containers necessary for storing processed food.

Aseptic processing involves sterilizing a food product that is, in turn, stored or packaged in a sterile container to maintain sterility. From his years of working in the family canning business, he knew that new methods to prevent post-harvest spoilage would be a big boost to the food processing industry and the consumer, according to his Purdue biography. Tomatoes were one of the world’s most processed foods, and Dr. Nelson questioned if they could be stored for long periods of time in tanks at ambient temperature aseptically, or free of pathogens, without becoming contaminated or spoiling. His aim was to hold large quantities of tomatoes to a date beyond harvest and then process them at intervals throughout the year into products such as sauces, juices, and ketchup. That, in turn, would make the tomato industry less seasonal. In recent years, it is estimated that more than 90% of the 22 to 24 million tons of tomatoes harvested globally are aseptically processed and packaged for year-round remanufacture.