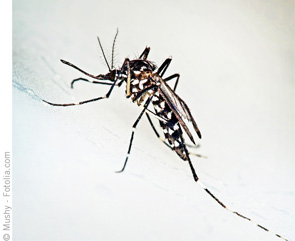 Food facilities can take preventive steps to control the spread of mosquitoes, including those that could be infected with Zika virus.

Zika is spread, for the most part, by the bite of an infected Aedes species mosquito, and infection with the virus has been linked with certain birth defects, according to the CDC. Mosquitoes that carry Zika are breeding in some areas of the U.S.

The FDA announced on July 27 that it is conducting an epidemiological investigation into a number of non-travel related cases in Miami-Dade and Broward counties in Florida. These cases may prove to be the first cases of local Zika virus transmission by mosquitoes in the continental U.S., according to the FDA, highlighting the need for aggressive mosquito control.

Zia Siddiqi, PhD, director of quality systems at Orkin, says the key to mosquito control is elimination of breeding sites. “A proactive approach that involves reducing the number of attractants around facilities and eliminating breeding and entry points is the best policy,” he advises.

Removing areas of standing water inside and outside a facility, such as water that collects in clogged gutters or puddles underneath broken water pipes is critically important. “Mosquitoes can breed in as little as half an inch of water, so be diligent in looking for and removing standing water on at least a weekly basis,” Dr. Siddiqi says.

Other preventive steps include eliminating entry points for mosquitoes, such as gaps in windows, walls, doors and screens. “Walk around your building to seal gaps with caulk or another sealant and replace screens that have holes immediately. Also, don’t let doors and windows without screens remain open for extended periods of time. Because mosquitoes tend to rest in thick vegetation, trimming back branches and bushes at least two feet away from the facility and thinning out dense vegetation on the property are important steps that can help control mosquitoes,” he says.

Patricia Hottel, technical director at McCloud Services, says that it “makes sense for a variety of reasons to practice good mosquito management regardless of whether or not you are located in the major areas of concern for Zika.”

Standing water in tanks contained with a concrete curb or low pit can become a breeding ground for mosquitoes, she says. “A facility which was built with areas where water can pocket due to poor drainage would be at greater risk for mosquitoes. Facilities that have a tendency to store equipment, metal, or plastic drums on the outside that collect water will have greater breeding potential,” she says. Truck ruts from delivery vehicles driving on grassy areas near a parking lot can also lead to water collection and mosquitoes. Landscaping should be designed to drain and not allow water to collect, advises Hottel.

Kathy Holliman, MEd, has been a medical writer and editor since 1997. She has worked on several publications focused on infectious diseases, cardiology, endocrinology, oncology/hematology, orthopedics, psychiatry, and pediatrics. Since becoming a freelance writer and editor in 2006, she has contributed to several healthcare publications in the fields of rheumatology, food quality and safety, internal medicine, and other medical association publications and medical education courses. Kathy has attended well over 100 medical meetings in the U.S. and Europe, and she continues to work as a writer and editor for onsite publications at several of those meetings. Reach her at [email protected]