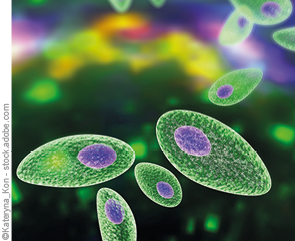 More than 40 million men, women, and children in the U.S. carry T. gondii, CDC reports, but very few exhibit symptoms, courtesy of the immune system usually keeping the parasite from causing illness. Nonetheless, toxoplasmosis, the disease caused by T. gondii, is considered to be a leading cause of death attributed to foodborne illness in the U.S., according to CDC.

Estimates suggest that 23 percent of adolescents and adults are infected with T. gondii, and CDC says the parasite accounts for 24 percent of deaths due to foodborne illness in the U.S.

Cats and other felids are the only hosts in which the parasite can complete its entire life cycle, and the only animals that excrete, in their feces, the environmentally resistant and infectious stage called the oocyst, which is microscopic. This knowledge came to light in 1970, thanks to landmark research led by Jitender Dubey, DVM, PhD, a microbiologist with the USDA ARS Animal Parasitic Diseases Laboratory (APDL), Beltsville, Maryland.

Since then, Dr. Dubey has been involved with myriad T. gondii research projects documented in peer-reviewed journals. In his 2008 “History of Toxoplasma gondii—The First 100 Years,” he calls the featured organism “one of the most well-studied parasites because of its medical and veterinary importance, and its suitability as a model for cell biology and molecular studies with a unicellular organism.”

Kittens and cats can shed millions of oocysts in their feces for as long as three weeks after infection, CDC says, adding that mature cats are less likely to shed Toxoplasma if they have been previously infected. A Toxoplasma-infected cat that is shedding the parasite in its feces contaminates the litter box. Outside, cats can contaminate the soil or water as well.

“Compounding this environmental contamination issue, oocysts in soil can be mechanically transmitted by invertebrates such as flies, cockroaches, dung beetles, and earthworms, which can spread oocysts into human food and animal feeds,” Dr. Dubey says.

Moreover, people can accidentally swallow the oocyst form of the parasite. CDC points out that this can occur after cleaning a cat’s litter box when the cat has shed Toxoplasma in its feces; after touching or ingesting anything that has come into contact with a cat’s feces that contain Toxoplasma; by ingestion of oocysts in contaminated soil, such as by not washing hands after gardening, or eating unwashed fruits or vegetables from a garden; or drinking water contaminated with T. gondii.

A serological test that can distinguish oocyst transmitted toxoplasmosis from tissue cyst transmitted toxoplasmosis in humans has been developed by ARS APDL. “Thousands of serum samples representing Toxoplasma infected people from the U.S. and other countries were tested,” says Dolores Hill, PhD, an ARS APDL research parasitologist. “Results of this investigation indicate that more than 70 percent of infected humans acquired their infection by exposure to oocysts,” she relates.

“Given recent evidence that many people become infected by ingesting oocysts, we must ascertain which foods confer greatest risk, and devise ways to remove or inactivate those oocysts without eroding such foods’ nutritional quality, flavor, or palatability,” notes Benjamin Rosenthal, SD, also an ARS APDL research parasitologist.

Pregnant women are advised not to clean litter boxes. A woman who is newly infected with Toxoplasma during pregnancy can pass the infection to her unborn child (congenital infection). The woman may not have symptoms, but her unborn child can be stricken with diseases of the nervous system and eyes, CDC warns.