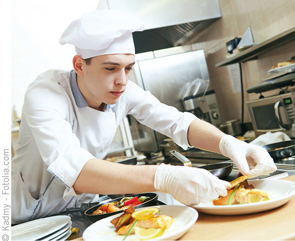 Let’s begin with the “Big 5” foodborne pathogens stated by the CDC and the FDA. These five foodborne pathogens include norovirus, the Hepatitis A virus, Salmonella, Shigella, and Escherichia coli (E. coli) O157:H7. Other less infectious pathogens that can also be transmitted by food employees to consumers through contaminated food include Staphylococcus aureus (staph infection) and Streptococcus progenies.

Norovirus is a highly contagious virus that can cause symptoms such as diarrhea, throwing up, and stomach pain. About 20 million people contract norovirus each year, most from close contact with infected people or by eating contaminated food. Norovirus is the leading cause of disease outbreaks from contaminated food in the U.S. Infected food workers cause about 70 percent of reported norovirus outbreaks. Contrary to a lot of belief, hand sanitizers are largely ineffective against norovirus, which is why proper handwashing with soap and water is a necessity.

Hepatitis A is a contagious liver disease that results from infection with the Hepatitis A virus. It ranges in severity from a mild illness lasting a few weeks to a severe illness lasting several months. Hepatitis A is usually spread when a person ingests the virus from contact with objects, foods, or drinks contaminated by feces or stool from an infected person. It is a must that all employees thoroughly wash their hands and fingernails after using the restroom. Some counties in the U.S. require all food handlers to be vaccinated against Hepatitis A.

Salmonellosis, the illness caused by Salmonella, primarily results in a mild to severe diarrheal illness, known as acute gastroenteritis. The CDC estimates that approximately 1.2 million illnesses and 450 deaths occur due to non-typhoidal Salmonella annually in the U.S. Person to person transmission of Salmonella occurs when an infected person’s feces, unwashed from his or her hands, contaminates food during preparation or comes into direct contact with another person.

Shigellosis is a diarrheal disease caused by a group of bacteria called Shigella. Most who are infected with Shigella develop diarrhea, fever, and stomach cramps starting a day or two after they are exposed to the bacteria. Shigellosis usually resolves in 5 to 7 days. Shigella causes about 500,000 cases of diarrhea in the U.S. annually. Shigella is found in the intestinal tract of infected people, and is spread by eating or drinking food or water contaminated with the bacteria.

E. coli is a large and diverse group of bacteria. Although most strains of E. coli are harmless, others can make you sick. Some types of E. coli can cause diarrhea, while others cause urinary tract infections, respiratory illness and pneumonia, and other illnesses. Still, other types of E. coli are used as markers for water contamination, so you might hear about E. coli being found in drinking water, which are not themselves harmful, but indicate the water is contaminated. E. coli O157:H7 is transmitted to humans primarily through consumption of contaminated foods, such as raw or undercooked ground meat products and raw milk. The importance of washing your hands is just as great, if not greater than the importance of washing your hands after using the restroom.

Now what can restaurants and retail stores do to mitigate the risk? It all begins with the policies and management in place. The manager is to make certain that food employees are trained in the causes and prevention of foodborne illnesses. Employers will benefit greatly if their employees are aware of the relationship between their job, personal hygiene, and foodborne illnesses. Management should explain to all food service employees the importance of reporting specific symptoms and any diagnoses or exposures to foodborne illness. If an employee is experiencing any vomiting or diarrhea, the manager should ask the food employee to stop work immediately and leave the food establishment. The employee should return to work no sooner than 24 hours after vomiting and diarrhea have ended.