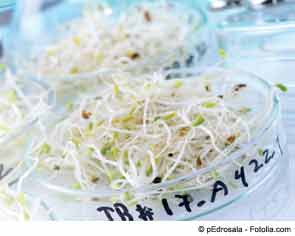 Sprouts are considered a healthy and highly nutritious food, often eaten raw in the U.S. on salads and in sandwiches. However, sprouts have also been linked to a number of outbreaks of foodborne illness in the past two decades. According to the Center for Science in the Public Interest (CSPI, 2011), 46 outbreaks related to consumption of sprouts were recorded between 1990 and 2011, causing at least 2,500 illnesses. Salmonella and pathogenic E. coli were responsible for the majority of outbreaks, and Listeria monocytogenes the cause of one.

These bacterial pathogens thrive under the same conditions that are used to sprout seeds. The warm, moist and nutrient-rich conditions will promote the growth of even a small number of cells to a high level.

In the second half of the 1990s, a number of large outbreaks resulting in more than 1,000 cases of illness prompted the FDA to issue two guidance documents to the industry in 1999. The first, entitled “Guidance for Industry – Reducing Microbial Food Safety Hazards For Sprouted Seeds,” outlined preventive controls that sprout producers should undertake to minimize the risk of sprouts being a vehicle of foodborne illness (FDA, 1999 a ). The guidelines were largely based on recommendations provided by the National Advisory Committee on Microbiological Criteria for Foods (NACMCF, 1999), including that seeds should be grown under good agricultural practices (GAPs), sprout producers should employ good sanitation practices, seeds should be treated with an approved sanitizer to reduce the number of pathogens that may be present on the seed surface, and that spent irrigation water during sprouting should be tested from each production lot.

The second guidance document, entitled “Guidance for Industry: Sampling and Microbial Testing of Spent Irrigation Water During Sprout Production,” was written specifically to guide sprout producers through the steps necessary to test the spent irrigation water for the two major pathogens of concern in raw sprouts, Salmonella and E. coli O157:H7 (FDA, 1999b).

It’s generally recommended that sprouters test spent irrigation water for pathogenic bacteria rather than testing the sprouts themselves.

Many varieties of sprouts are grown around the world and in the U.S., requiring various growing times and conditions. The FDA guidance document on spent irrigation water testing was written with a focus on alfalfa and mung bean sprouts, where pathogenic bacteria, if present, are likely to be at their highest levels at or after 48 hours from the start of the sprouting process. Collection of samples for testing was therefore recommended to be performed at least 48 hours after sprouting, including any length of time that seeds are presoaked prior to irrigation.

Testing should be performed at an appropriate time that ensures the sprouter will obtain test results before product is shipped. A number of rapid test kits are listed in the FDA guidance and these screening tests can provide a presence or absence result for Salmonella and E. coli O157:H7 within 48 hours. Therefore, by collecting samples at least 48 hours prior to shipping product, the test result can be known to the company prior to making a decision on whether or not to ship the product.