Everyone, especially those in the food industry, has experience with mixing. All of us have at least some experience in the kitchen, and many of us have extensive experience. Commercial process mixing can be very different from kitchen or laboratory mixing for several reasons. In the kitchen or development laboratory, quantities are small and distances are short. Almost any mixing occurs quickly, especially in comparison with production scale equipment and processes. In the kitchen or laboratory, mixing intensity usually can be increased or decreased to achieve good results. Small-scale results can be easy to observe even as the mixing takes place. Kitchen and laboratory mixers are usually designed to handle a wide variety of food properties.

Everything that seems simple in the kitchen or laboratory becomes more difficult at the production scale. Even when successful mixing is done and observed carefully in small-scale development, scale-up to reproduce those results at a production scale can be difficult. Some knowledge of mixing and a little creativity can overcome many of the common problems.

The following discussion of mixing includes many of the common problems experienced in production mixing for foods. The discussion also provides ideas on how the problems can be solved, or at least improved. If the process results do not make products that meet your quality standards, something needs to be investigated and changed. 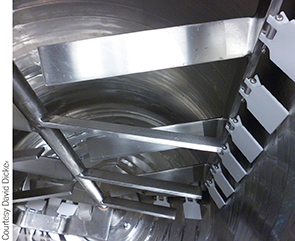 One of the biggest obstacles to improving mixing is the requirement to use existing equipment, as opposed to buying new equipment. This limitation becomes an even bigger challenge when the equipment is more than 25 years old, which is common, or when used equipment is purchased. Old equipment, even if it has been well maintained, may not match the current product or process requirements. Used equipment is probably chosen because of price or availability rather than needed performance.

The upside to these equipment problems is that many facilities have a variety of mixing equipment with different sizes, mixers, and heating capabilities. The first step in solving these practical limitations is understanding the capabilities of each piece of mixing equipment. Total tank volume is important, but knowing the minimum and maximum practical operating volumes is more important. Trying to mix a batch that is too small for a mixer can be as bad as mixing a batch that is too large. Mixing intensity is usually inversely related to batch size. The same mixer used in a small batch should provide more intense and rapid mixing than in a large batch, even if the mixer does not have a variable speed capability. Batch size will also affect the mixer’s influence on surface motion.

Good surface motion may be an advantage for ingredient addition. However, a deep surface vortex becomes a problem if it draws air into the product, especially if the product tends to foam. Antifoam may solve some problems but not all of them. A surface vortex should never extend more than halfway from the surface to the mixing impeller. Vortex depth is strongly influenced by the depth of the liquid over the impeller nearest the surface. If all these ideas seem obvious, unfortunately they are often overlooked or not communicated to the people who need to know.

From Product Development to Production

Many process problems develop in the transition from product development to commercial production. Scale-up is not a single procedure that always works. Successful scale-up will depend on different methods for different products. Some knowledge and observation of a specific formulation can make scale-up from the development lab to production more reliable.