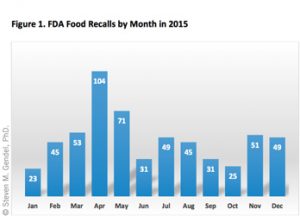 The FDA describes the goal of the current Good Manufacturing Practice (cGMP), Hazard Analysis, and Risk-Based Preventive Controls for Human Food Rule (the “PC Rule”) as being to establish a food safety system in which industry systematically implements measures that are known to be effective in preventing contamination (FDA Voice, Jan. 7, 2016). To this end, the rule mandates that facilities conduct a hazard analysis to identify the “known or reasonably foreseeable” hazards associated with the foods that they produce. A complete and accurate hazard analysis is the crucial first step in designing an effective food safety plan.

In the PC Rule, the FDA says that the information needed to carry out the food safety hazard analysis can be found through “experience, illness data, scientific reports, and other information.” While illness data are unquestionably valuable, they only describe a small part of the food safety universe. The CDC estimates that the affected food is identified for only about 5 percent of all foodborne illnesses. Further, illnesses and injuries caused by physical hazards and by most chemical hazards are not tracked by any public health agency. Illness data, which concern foods at the end of the distribution and preparation chain, cannot be used to identify manufacturing problems except in rare cases (i.e., outbreaks with successful trace back).

Recall information, on the other hand, can often be used to identify food safety problems at the point of production. Recall information provides actionable feedback to food manufactures that can be directly

applied to process evaluation and improvement. While there is some overlap between illness and recall data, the unambiguous relationship between hazards and foods in the recall data makes this information substantially more useful than other data sources.

The year 2015 was another busy year for FDA food recalls. There were a total of 577 food-related recalls in 2015, which is similar in number in each of the previous two years (Table 1). In FDA speak, each recall is an incident and each incident may involve recalls for multiple products. The number of recalls per month ranged from 23 to 104 (Figure 1). The time between the initiation of a recall and the date that it appeared in an enforcement report ranged from 12 to 917 days, with an average of 68 days. It is not clear why it takes so long for some incidents to be reported in an enforcement report. This lag is different from the lag reported recently by GAO that occurs between the time that FDA becomes aware of a problem and the time that a recall is started.

The level of public health concern, as judged by FDA, for each recall is indicated by the recall class (I, II, or III). Recalls can also be classified according to the type of hazard involved as described in the PC Rule (biological, chemical [which includes allergens], or physical hazards). Table 2 shows both classifications for the 2015 FDA recalls.

There were 39 recalls caused by physical hazards in 2015. Of these, 35 were Class II; none were considered to be Class I. Metal (14) and plastic (9) fragments accounted for more than half of these recalls.