Editor’s Note: This article on the history and impact of advances in ATP bioluminescence is the third in a new series for Food Quality. In “FoodTech: Tools That Changed the Industry,” we look at various technologies and tools, such as ATP bioluminescence testing, that have played a key role in and had an indelible impact on the food industry.

Adenosine triphosphate—ATP—is an energy molecule stored in all microorganisms and therefore an indicator of life. That fact did not escape the National Aeronautics and Space Administration, which has long been studying the use of ATP bioluminescence, a reaction similar to the naturally occurring glow of a firefly’s tail, as a way to detect the bioburden on a spacecraft or to search for intelligent life on other planets.

But ATP bioluminescence also has very down-to-earth uses in the food industry as a rapid, simple, and reliable test to monitor surface contamination during processing and to detect contaminants in drinking water or beverages. In the case of surface contamination, a pen-like device containing reagents is simply swabbed over an area, then inserted into a handheld reader that displays results within seconds in relative light units (RLU), indicating clean/unclean and, in some cases, marginal results. The cost is only dollars per test. Since ATP methods only give a broad measure of the presence of organic substances—not the specific microorganism containing the molecule—they must still be used in conjunction with microbial culture or other tests. 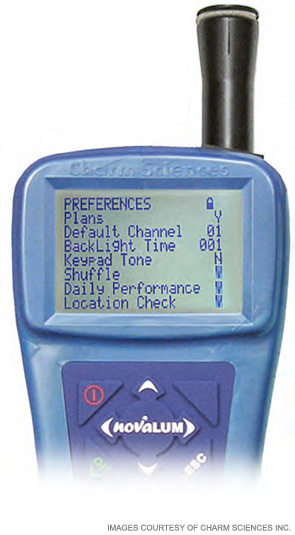 “Surface ATP bioluminescence testing is the best proactive tool to assure you are manufacturing food on clean equipment,” said Ken Davenport, PhD, global technical services product specialist in the 3M Food Safety Department in St. Paul, Minn. 3M, which acquired another ATP-bioluminescence company called Biotrace International, has a number of ATP-based products, including the Clean-Trace luminometer that reads the swabs and software that analyzes the data.

ATP bioluminescence began to gain traction over culture agar approaches in the late 1980s, its success prompted, like many hygiene methods, by large, public cases of food poisoning. Initially, the technology was primarily used in laboratories, where suitcase-sized luminometers had to be plugged into a direct power source and required sophisticated users. In the early 1990s, battery power allowed smaller devices to be lugged to manufacturing sites, but they still weighed about four pounds. In the past several years, the technology has evolved into rapid-response handheld readers weighing about a pound.

Now the technology is the darling of food manufacturers. “In North America, 80% of food production facilities are using these,” said James Topper, MBA, market development manager-healthcare at Neogen Corp. in Lansing, Mich. He estimates that more than 80% of European food production facilities are using it as well; the numbers are lower in Asia. Neogen, a former Biotrace distributor, came out with its own AccuPoint ATP Sanitation Monitoring System that uses a half-inch-diameter sponge disk that the company says takes a more consistent sample compared to the cotton-swab-shaped pen tip used by competitors.

“It is a validation of cleaning, of whether equipment is clean enough to be used for production,” Topper said. He pointed to the example of a customer on the East Coast using the system in a baking application. “They were getting higher readings in the morning and weren’t able to figure out why,” he said. Discussions with the user revealed that there had been a change in production. The company was producing something in a different room nearby overnight, and the residue was depositing on the production line, cross-contaminating it. “They wouldn’t have known this was occurring unless they tested with our system,” Topper said.

Lori Valigra writes about science, technology, and business for general and specialty news outlets in the U.S., Europe, and Asia, including coverage of the "farm to fork" movement and food safety. She’s been involved in several media startups, and had articles published by The Boston Globe, Reuters, Science magazine, and others. She holds an MS in science journalism from Boston University and a BS in medical writing from University of Pittsburgh. She won numerous journalism fellowships and awards, including the Knight Science Journalism Fellowship at the Massachusetts Institute of Technology. Lori enjoys bicycling, snowshoeing, gardening, and traveling. She lives in the western mountains of Maine. Reach her at [email protected]