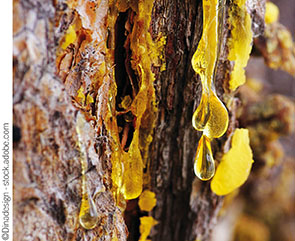 Glycerol esters of rosin, commonly known as ester gums, are highly versatile resins used in adhesives, coatings, inks, and other markets. Their unique functionality has led to specialized food applications in beverages and chewing gum.

An interesting example is the use of glycerol ester of wood rosin (GEWR) as a beverage-weighting agent (BWA) for citrus-flavored beverages. This application was created by a long-term cooperative approach with beverage customers and regulatory agencies. Food applications require rigorous testing to demonstrate safety and compliance with all global standards. The safety of GEWR was originally established by rigorous toxicological testing and has been further proven by five decades of global use in beverage production. Active support of the regulatory process has demonstrated an ongoing commitment to product safety that’s a global expectation of consumers for all food additive manufacturers.

Scientific opinions by the European Food Safety Authority in 2010 and 2018 reiterated that a valid safety assessment of glycerol esters of rosin in food applications should consider species-specific differences and require appropriate compositional and toxicological data. The approval of the original GEWR, which is derived from longleaf and slash pines, was based on this foundation of testing that ensures food additive safety.

Many citrus-flavored beverages, such as carbonated soft drinks and sports drinks, are emulsions of flavor oils in water. These drinks are technically challenging, requiring the production of emulsions stable in the form of concentrate, syrup, and diluted beverage over a range of storage and handling conditions. Beverage instability results in oil droplets migrating to the surface of the liquid with undesirable effects on taste and appearance. Emulsion stability requires both an emulsifier and a BWA, with the BWA used to increase the density of the dispersed flavor oil phase, thereby reducing the density difference between the oil and aqueous phases and enhancing stability.

Glycerol esters of rosin are the best known and most commonly used weighting agents in the beverage industry. There are two distinct types on the market: GEWR and glycerol ester of gum rosin (GEGR). GEWR was identified in the 1960s as an ideal candidate for application as a BWA. This versatile resin, based on a natural and renewable feedstock, has excellent solubility in essential oils. An extensive process of applications development and product safety testing established GEWR as the predominant beverage-weighting agent in the market. GEGR has trailed in the footsteps of GEWR in an attempt to gain the same widespread market acceptance.

Glycerol esters of rosin are used to modify the properties of diverse formulations in adhesives, coatings, inks, and food applications. Their broad compatibility and solubility encourage uses in a wide array of markets. The primary differences in GEWR and GEGR arise from the sourcing, pine species, and production processes used for their feedstock rosins. Rosins derived from different pine species can vary widely with respect to composition and physical properties, such as softening point, causing performance disparities in some end uses. Although GEWR and GEGR are used in many of the same markets, they are not interchangeable in all applications. GEGR traditionally has been less expensive than GEWR but is limited by less comprehensive regulatory approvals in areas such as beverages.

GEWR: Wood rosin is the natural resin produced by the solvent extraction of aged pine stumps followed by a liquid-liquid solvent refining process. This technology was developed in the first half of the 20th century. The feedstock is stump wood from longleaf (Pinus palustris) and slash (Pinus elliottii) pines grown in the southeastern United States. These stumps are left in the ground after harvesting of the pine trees for other uses and are a renewable resource. The refining process produces rosin of highly consistent quality, meeting purity specifications required by numerous end-use applications.