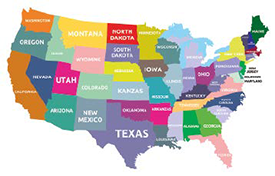 U.S. states vary widely in how well they detect, investigate, and report outbreaks of foodborne illness, according to a new 50-state analysis from the nonprofit Center for Science in the Public Interest (CSPI) entitled “All Over the Map: A 10-Year Review of State Outbreak Reporting.” States are also reporting fewer outbreaks to the CDC. From 2009 to 2012, the average number of reported foodborne outbreaks decreased by about one-third compared to the six preceding years. CSPI found widely different outbreak reporting rates even among adjacent states with similar populations. Florida, for instance, reported five times the number of outbreaks as Alabama when controlled for population, and Maryland reported four times the number of outbreaks as West Virginia. A high outbreak reporting rate actually can prevent illnesses, as it indicates state and local public health officials are looking for outbreaks and are more likely to identify contaminated foods or offending restaurants.