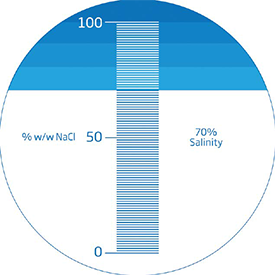 In mechanical refractometers, the sample is placed on a prism, and the user looks through an eyepiece to determine the “shadow line” to determine this critical angle.
Image Credit: Hanna

Sodium occurs naturally in virtually all foods, albeit in relatively small amounts. Table salt, in the form of sodium chloride (NaCl), is a common additive to food products and is used as a preservative and a flavor enhancer. Traditionally, salt was added to food as a form of preservation. Since the advent of refrigeration, salt is more commonly used to enhance flavor but its ability to reduce microbial growth, improve texture, and increase shelf life are still utilized. Sodium may be added in forms other than table salt, such as sodium nitrate, sodium bicarbonate (baking soda), and monosodium glutamate. Sodium can also be added during food production from more complex sources, such as in soy sauce, garlic salt, or other condiments.

Sodium is an essential nutrient in the human body, but is only needed in relatively small quantities. It plays a critical role in the body’s ability to control blood pressure and blood volume. However, as sodium intake increases, health risks such as high blood pressure increase. Monitoring and maintaining healthy blood pressure levels reduces the risk of cardiovascular disease, congestive heart failure, and kidney disease. The major source of our daily sodium intake is from table salt (sodium chloride). The Institute of Medicine states that for individuals age 9 to 50, the Adequate Intake (AI) level for sodium is 2,300 milligrams per day. The AI levels are recommended daily average intake amounts of a specific nutrient. For infants, whose calorie requirements differ widely from adults, the sodium AI level is significantly lower. Individuals with pre-existing hypertension or other cardiovascular conditions are also generally advised to limit sodium content below the recommended AI as well.

As more research describing the potential health risks of a high sodium diet became published, manufacturers have made increased efforts to reduce sodium content of foodstuffs without compromising the quality of the finished product. Although low-sodium products are appealing to health-conscious consumers, there is risk of under-seasoning products, which may compromise flavor, texture, or shelf stability. As a result, strict control over low-salt formulations throughout the production process is necessary, from research and development to QC.

Selection of a method of analysis for salt content in food is a significant decision to make when designing a quality assurance plan. There are several different technologies and methods available for determining salt content of food; each method has their own advantages and limitations. Some of the most obvious advantages and limitations include the cost of investment, accuracy, and turnaround time for each test. However, ease of use, cost per test, and the amount of technical expertise required to perform each analysis are often significant concerns. Based on these parameters, QC departments typically use industry standard technologies for assessing salt content: refractometry, ion-selective electrodes, and titration.

Refractometry. This method determines the salt content of a substance based on its refractive index. Refractive index is determined by passing a light through a prism into a sample and measuring how the light bends and establishing the critical angle. The critical angle is the angle at which no light is refracted and all light is internally reflected.

Refractometry can be used to determine a wide variety of parameters including sugar, propylene glycol, gelatin, and salt. Based on the types of dissolved solids in a sample, a refractive index is generated and converted to a measurement unit such as % Brix (sucrose) or % salt. It is important to note that refractometers are not specific, and only measure total light refraction. This makes them ideal for quantitative use in binary solutions, such as a salt brine solution, or for qualitative measurements in a finished product as a measure of consistency from batch to batch.