The growing demand for perishable food is challenging food shippers to find sufficient cold transport and storage. This demand is propelled by health-conscious consumers around the world, seeking more fruits and vegetables, fresh and frozen, all year long. Suppliers are busy building temperature-controlled facilities and using refrigerated trucks, trailers, containers, and other technology to meet this growing demand with quality and safety.

Consider the market for bananas. They are the most consumed fresh fruit in the U.S., with an annual consumption of just over 11 pounds per person. Many shipments of this popular fruit come from Central and South America. Since shippers seek the most optimal shipping route, the Port of Tampa decided to build a cold storage facility to accommodate inbound shipments. Completed and opened this year, it can receive nearly 4,000 pallets of bananas in a given week. For example, the facility receives Chiquita bananas from Ecuador so they can go into storage and await distribution to markets throughout the U.S.

Going to Tampa instead of further up the Eastern Seaboard to Philadelphia (where many cold storage facilities are located) saves about three days in the supply chain timeline for these perishable items. Such careful calculation and concern have gained heightened importance in this robust global market.

This trend has created a logistics problem; too many fresh and frozen goods with too few assets to store and transport them.

“The overall shortage in the trucking industry is hitting the less-than-truckload cold transport hard,” says Mark Nelson, CEO of Perishable Shipping Solutions, a Youngstown, Ohio-based company that runs a fulfillment service for food companies serving online food shopping networks. “We continually experience shipping delays and no-shows. It’s one thing to have a trucking company quote a high price; but they often confirm shipments and drivers don’t show. This is a common occurrence.”

Tal Paperin, vice president of business development for Israel-based KSW Solutions, a consulting firm whose services include logistics consulting, says public concern in food safety is growing. “In the past, consumers weren’t so interested in where their food came from, how it was stored, or how it was transported,” he explains. “But that’s changing. Companies are serving a more health-conscious consumer as well as many more concerned about food safety. 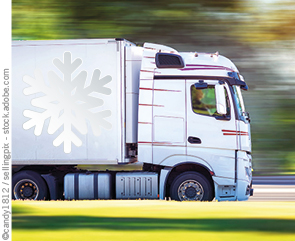 “With the Internet, people are more aware of the food transportation and storage industry,” continues Paperin. “Not just consumers, but even people working in quality control in the grocery store pay attention. This awareness has stimulated heightened demand for fresh foods, worldwide. Consumers want fresh food all the time, from wherever it’s grown. Cold transport makes that possible. A tightening in the supply of cold transport not only makes such fulfillment more difficult, but also could jeopardize the safety of food that could perish with any substandard cold storage or transport.”