West Michigan turkey growers faced a high hurdle in 1998, when Sara Lee decided to stop harvesting birds at its Zeeland, Mich., plant. The growers were left with nowhere to sell their birds, and, in response, developed a cooperative of growers that became Michigan Turkey Producers, a supplier of both raw and ready-to-eat products.

“[The growers] had three choices: They could just hang it up and not produce any more turkey; they could convert over to some other animal agriculture like chickens or hogs; or they could continue to grow turkeys, but they had to have a processing plant to process the meat in,” Dan Lennon, president and CEO of Michigan Turkey Producers, told Food Quality. 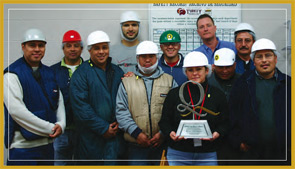 A group of employees from Michigan Turkey Producers pose with the Food Quality Award. The company believes that communication is key to ensuring that all employees are looking out for safety and quality; associates attend both weekly and monthly meetings with managers.

Throughout the years, Michigan Turkey Producers has grown from a raw-only producer with 275 employees to a raw and cooked producer with 560 employees, more than doubling its people and processes. “We’ve changed a lot since we started,” Lennon said. “We’ve added processes and we’ve added people, and we really haven’t suffered at all from any of those changes or growth.” Not only have they not suffered, they have flourished. The company recently received the 2009 Food Quality Award. The award is presented by Food Quality magazine and sponsored by DuPont Qualicon.

After forming the co-op, the farmers pooled their resources and purchased a former Simplot potato plant that had been vacant for two years. The growers renovated it and designed a state-of-the-art processing plant that enabled them to process four million turkeys per year, Lennon said.

Lennon was recruited from Sara Lee at the time and helped to form the rest of the staff.

“It was an interesting time,” he said. “We had no customers, no product, no computer system, no accounting system …. It was a lot of work, but it was a lot of fun.”

The company evolved through the years, and in 2002 to 2003, the turkey business took an economic turn for the worse. Producers of only raw products were at an even greater disadvantage. “We decided we needed to have more stability and a few more markets to sell our products into, and the only way to get that was to cook meat,” Lennon said.

In 2005, Michigan Turkey Producers purchased another local plant two miles from the original plant. This plant had also sat idle for two years. After renovating throughout the end of 2005, Michigan Turkey Producers cooked its first pound of meat in the plant in February 2006. “In that time, we’ve grown from zero pounds of cooked meat to about 25 to 26 million pounds of cooked turkey meats per year,” Lennon said.

The company is now considering its next step, which may include expanding its cooking capability within the existing ready-to-eat plant. According to Lennon, the company’s challenge now is to determine what types of products to produce, whether whole deli-type products, slicing logs, or sliced meats.

“We’re very proud of what we’ve accomplished,” Lennon said. “We’ve come a long way in a fairly short period of time, and we’re looking forward to the future, because we think it’s definitely going to offer more opportunity than we’ve even captured so far.” ■

DiMarcantonio-Brown is a freelance writer based in Philadelphia; reach her at [email protected].