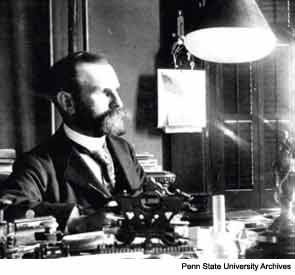 Professor William Frear in his office at Penn State University.

Commercial foods were fraught with impurities in the latter half of the 19th century when they were supplanting home-prepared foodstuffs. These foods arose from a need to feed the growing populations in cities and support an industrializing nation. But the commercial foods were largely unregulated, opening the door for adulteration by adding chemicals to enhance flavor and even covering up and reusing food that had gone bad. This concerned Pennsylvania State University Professor William Frear, PhD, (1855-1921), who took up the charge to analyze potentially tainted food in an effort to protect the quality and purity of the commonwealth’s, and the nation’s, commercial food supply. This was much needed as he found canned peas laced with copper dioxide to make them look greener, licorice candy blackened using soot, and candy sweetened using lead.

In 1900, he analyzed 11 samples of ketchup or mustard, and found that four contained salicylic acid, which prevented fermentation but also impeded digestion, according to Penn State historian Michael Bezilla. He also found water added—an illegal practice as well—to two of eight lard samples and 21 of 96 milk samples, the latter of which also were found to contain boric acid or formaldehyde preservatives. Dr. Frear, a chemist with a doctorate from Illinois Wesleyan, became known for his testing work, and often appeared as an expert witness for the Commonwealth of Pennsylvania in court cases against alleged food adulterators. In 1900, Pennsylvania had nearly 1,000 cases of alleged adulterations pending in the courts, Bezilla wrote. The commonwealth is now known for having stringent consumer food protection standards, a status largely credited to the work of Dr. Frear.

While having healthy food was a public health issue, political and corporate leaders, as well as the courts, tended to favor the manufacturers at the time. The notion was that government shouldn’t interfere in business. Also, state laws did not cover interstate commerce of the food products. Pennsylvania was not alone in having its hands tied as the situation occurred in other states as well.

But popular pressure for more protective food laws was strong, and states began setting up regulatory agencies. There also was public pressure for the federal government to enact uniform and stringent pure food and drug laws. Dr. Frear took a central role in working with some of the agencies and the federal government to try to reverse the problems. He helped organize the first National Pure Food and Drug Congress in Washington, D.C., in 1898. It was attended by agricultural scientists, politicians, social reformers, and some food industry representatives, and was followed by two more congresses.

He also acted as chairman of the food congress’ executive committee and headed the Food Standards Committee of the Association of Official Agricultural Chemists. This brought him to work closely with his former boss when he was a chemist at the USDA, food safety pioneer Harvey W. Wiley, MD. While Dr. Wiley is widely credited as having largely written the federal Pure Food and Drug Act of 1906, Dr. Frear headed the committee that devised the guidelines for the Act, which formed the foundation for today’s U.S. FDA.

Dr. Frear participated in Dr. Wiley’s campaign to get safe food laws passed. Dr. Wiley had brought notoriety to the effort by organizing volunteers, who were known as the “poison squad,” to eat meals laced with the harmful chemicals then used as food additives so they could see which ones made them sick. The goal of the so-called “table trial” was to study the human effects of common preservatives in items like ketchup and other condiments, in which they often were used to cover up unsanitary production practices. The volunteers ate meals together, taking in increased doses of preservatives such as borax, benzoate, formaldehyde, sulfites and salicylates. The results were debated, but many people began afterward to avoid foods that contained formaldehyde and other preservatives. And the cause for safe foods got even more publicity.