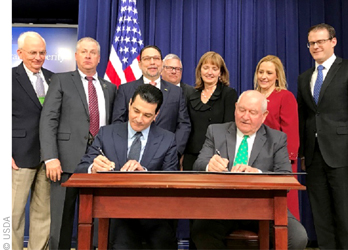 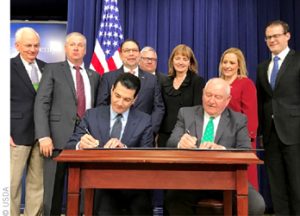 Heads of the USDA and FDA officially agreed to streamline their agencies’ regulatory responsibilities and use government resources more efficiently to protect public health in a signed statement on January 30. The agencies will partner in many key areas, including implementing produce safety measures and biotechnology efforts.

The initiative also aims to increase clarity to manufacturers and potentially reduce the number of establishments subject to the dual regulatory requirements of the USDA and FDA. The USDA oversees the safety of most meat, poultry, catfish, and certain egg products, while the FDA has authority over all other foods such as dairy, seafood, produce, and packaged foods. When a facility produces a product that contains foods overseen by both agencies, such as a soup containing meat and vegetables, it is currently subject to regulation by both agencies. By working together, the agencies can reduce costs to the industry and free government resources to better target efforts to areas of risk.

In commenting on the agreement, Darin Detwiler, LPD, M.A.Ed., assistant dean of graduate academic and faculty affairs, College of Professional Studies, Northeastern University, Boston, Mass., says streamlining the power of the two agencies to better coordinate and communicate facts is paramount. “Currently, if a foodborne outbreak occurs, until it’s determined which food product is to blame and which agency has authority, neither one can take action. That is not a good scenario. By combining efforts, it should no longer matter which food product is the culprit. Both agencies should be able to act immediately.”

Dr. Detwiler also believes the move will result in a better balance of authority when it comes to mandating food recalls. As it currently stands, the FDA has recall authority but the USDA does not—it can only request a recall. “The ultimate goal is minimize the number of people that become ill and die due to foodborne illness,” he says.

PCV & Associates, LLC’s Purnendu C. Vasavada, PhD, professor emeritus and Food Quality & Safety magazine’s co-industry editor, believes the food industry will benefit from the collaboration because if each agency’s responsibilities are streamlined and there are no longer conflicting expectations—making compliance difficult at times, money could be saved. For example, food manufacturers could cut costs related to inspections, and sampling and testing programs. “By combining resources, the agencies can target where problems exist and work on resolving them more efficiently,” he concludes.

Karen Appold is an award-winning journalist based in Lehigh Valley, Pa. She has a BA in English (writing) from Penn State University and has more than 20 years of editorial experience. Karen has been a full-time freelance medical writer and editor since 2003. She works for various medical organizations, businesses, and media. Karen has also worked in a variety capacities, including newspaper reporter, editor of a daily newspaper, and editor of a monthly magazine. Reach her at [email protected]