Axium’s UR robot deployment includes packing finished flexible snack food bags into shipping cartons at high speed. “This has been a cost-effective solution for us compared to the fixed automation case packers we were previously using,” Stokely says.

“Using a UR robot for erecting the auto-bottom shipping cases supplied by our customers is working faster than having humans perform the task manually, while also taking the risk of repetitive trauma injuries out of the process,” he continues. “And constructing standard RSC (regular slotted case) shipping cartons with a robot offers more flexibility than fixed automation, when combined with existing semi-automatic bottom tapers.”

Axium’s robot deployments share one attribute, Stokely points out. “The UR5 has been coupled with off the shelf components to form a work cell, and only the Case Packer UR5 is fixed in place,” he says. “However, the application has dimensions and capabilities not found in fixed automation, thus extending the impact of our capital investments.”

Stokely is quick to mention that the snack food industry is highly competitive, with one dominate market leader. “The remaining snack food companies frequently change their SKU (stock keeping unit) offerings and presentations, leading to frequent end of line packaging changes,” he relates. “Given the frequency of these changes, and the nature of fixed automation to just do one task well, collaborative robots are proving to be a game changing addition to Axium Foods, due to their increased capabilities and flexibility.”

FANUC America, a Rochester Hills, Mich.-based robotics company, has been ahead of its time relative to preventing food safety hazards, according to Nishant Jhaveri, MS, the company’s manager of small robots and applications. 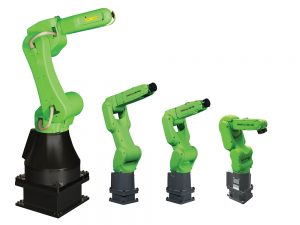 FANUC’s line of collaborative robots are equipped with highly-sensitive contact detection allowing them to share workstations with people.

“The Food Safety Modernization Act’s regulations are now shifting food companies’ focus from responding to contamination to preventing hazards in first place,” Jhaveri points out. “But FANUC has been investing heavily in research and development efforts since 1982, in order to bring the best-in-class robotic products for food manufacturers to the marketplace. Because of these extensive efforts, FANUC has continuously expanded food-grade robot models to handle a variety of primary (unwrapped) and secondary (wrapped) food handling applications, all of which allow food manufacturers to realize the highest possible uptime and consistent quality, while minimizing hazards.”

For the company’s first such example, Jhaveri cites FANUC’s M-430iA series, used for picking and packing, which he says is the first ever articulated robot series to meet hygiene requirements for meat and poultry processing, and receive equipment acceptance from the USDA.

“All the food robots are IP69, which means they can withstand high-pressure chemical cleaning required where food products are handled,” Jhaveri mentions.

In September 2016, FANUC introduced its line of small collaborative robots, namely the CR-4iA, and CR-7iA, which complement the larger CR-35iA 35kg robot launched in 2015.

“The newest edition in the FANUC portfolio, introduced in November 2016, includes the M-20iB/25C food/clean model that offers a fully enclosed design, a stainless wrist flange with IP67 protection rating for the entire unit to withstand harsh environments and provide adequate chemical resistance in most cleaning processes,” Jhaveri relates. “This robot provides a generous 25 kilogram (kg) payload capacity with more than a 1.8-meter reach suitable for a variety of food manufacturing processes, including sorting, kitting, stacking, washing, packing, and palletizing.”