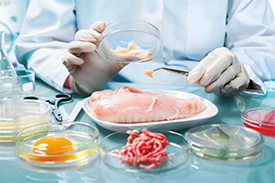 A revolution in the accountability and quality of food laboratory testing may be underway due to the Food Safety Modernization Act. Already, proposed regulations acknowledge the significant role laboratory testing plays in the detection and identification of microbiological and chemical hazards. They call for the use of verification testing, environmental monitoring, and product testing, and outline procedures to account for these activities. A section of the law calls for the recognition of laboratory accreditation and the development of model laboratory standards, all of which may set a new benchmark that all food laboratories must strive to meet.

Microbiologics, a global provider of biological reference materials used in laboratory quality control processes, commissioned a third-party survey to ascertain the level of laboratory standards currently employed by food laboratories. The survey offered 186 food laboratory directors, quality assurance managers, and technical supervisors the opportunity to participate in an online survey. Surveys were sent to individuals working in laboratories within food manufacturing companies and to independent food laboratories. Individual responses are anonymous and Microbiologics only received results reported in the aggregate.

These laboratories fulfill a wide range of testing needs. A majority of respondents, greater than 60 percent, indicated each of the following testing types are conducted by their laboratories: environmental monitoring, finished product testing, ingredient testing, raw material testing, verification testing, and validation testing.

Please indicate the type of testing conducted by your laboratory. (Check all that apply.)
Image Credit: Auburn Health Strategies

Proficiency testing, where a laboratory will receive and perform testing on unknown specimens from an impartial third-party source, is a form of external quality control.

Which standards or processes does your laboratory follow? (Check all that apply.)
Image Credit: Auburn Health Strategies

Survey participants were asked what percentage of their laboratory staff is certified as food scientists or technologists. Certification of food scientists and technologists is offered as a credential from a limited number of professional societies and trade associations.

A section of the law calls for the recognition of laboratory accreditation and the development of model laboratory standards, all of which may set a new benchmark that all food laboratories must strive to meet.

Fifteen percent, or 28, of the laboratory leaders contacted responded to the survey. No two respondents are from the same laboratory. The aggregate results provide a glimpse into the level and knowledge of laboratory standards currently employed by food laboratories.

Among the overall results, it is notable that over 60 percent of respondents utilize both onsite and contract laboratories for what appears to be a wide range of testing needs.

Stombler is president of Auburn Health Strategies, LLC in Arlington, Va. Reach her at Rstombler@auburnstrat.com.

AUTHOR NOTES: Percentages presented in this report are rounded to the nearest whole number. This survey was made possible by Microbiologics and was produced by Auburn Health Strategies.