Vibrio spp. represents a serious threat to human health. Three species in particular are linked to gastrointestinal issues and can lead to infections and septicemia: V. cholerae (VC), V. parahaemolyticus (VP), and V. vulnificus (VV). These pathogens are most commonly found in raw or undercooked seafood such as fish, squid, oyster, and shrimp. V. cholerae is the main factor that causes cholera, which is an important public health problem worldwide.

VP was first identified as a cause of foodborne illness in Japan in 1950 when 272 individuals became ill and 20 died after the consumption of semidried juvenile sardines. VP causes three major syndromes of clinical illness: gastroenteritis, wound infections, and septicemia. The most common syndrome is gastroenteritis. Symptoms of this syndrome include diarrhea with abdominal cramps, nausea, vomiting, headache, and low-grade fever. Strains from this pathogen that are isolated from diarrheal patients produce either the thermostable direct hemolysin (TDH), the TDH-related hemolysin (TRH), or both, while hardly any isolates from the environment have these properties. 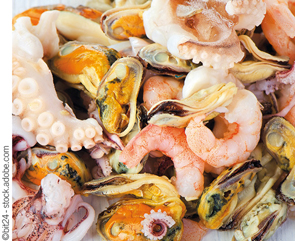 In 2009, a Vibrio outbreak in Singapore was associated with consumption of Indian rojak (a traditional salad of fruits, vegetables, and seafood). The Singapore Ministry of Health concluded its investigations into the food poisoning cases and identified VP, traced to the cross-contamination of rojak and raw seafood ingredients harboring the bacteria as the source of the outbreak. Laboratory investigation confirmed 13 of the cases to be positive for VP, including the first fatal case.

The risk of these pathogens may only be getting worse. Scientists warn that, because climate change causes an increase in sea surface temperatures and a rise in sea levels, VP and VV infections will become more common. This is because warmer, rising waters create an even more welcoming environment for the deadly pathogen. Subsequentially, it is especially crucial that methods to efficiently detect Vibrio are developed.

FDA’s Bacteriological Analytical Manual (BAM) (Chapter 9) and the International Organization for Standardization (ISO) 21872-1:2017 are the two standard methods widely used for the detection of Vibrio. While these are the standard, there are still many issues that arise with these methods.

Neither of these methods provides a good selective enrichment medium for Vibrio species. Instead, different formulations of alkaline peptone water (APW) have been used as the preferred enrichment for certain Vibrio targets or food matrices. Still, no single enrichment procedure for classical isolation, by plating or selective media, has been validated by FDA or the ISO for all three strains.

Finding a single enrichment procedure that works for all three different strains is an important challenge faced by seasoned microbiologists today. The preferred enrichment temperature for VC is 42°C, but the preferred temperatures for VP and VV differ at 35-37°C. Furthermore, some food matrices containing high background flora or inhibitory compounds, such as bacterial growth or polymerase chain reaction (PCR) inhibitors, might require alternative enrichment schemes. In addition, the duration of enrichment and plating efficiencies of presumptive isolates could affect classical confirmation, making them difficult. Overgrowth of competing organisms might occur if enrichment duration exceeds 20 hours. This makes it difficult to isolate Vibrio on selective agar plates. Thiosulfate citrate bile salts sucrose (TCBS) agar is widely used as the main selective agar for isolation of the three target species by both the FDA-BAM and ISO methods.

Because climate change causes an increase in sea surface temperatures and a rise in sea levels, V. parahaemolyticus and V. vulnificus infections will become more common. This is because warmer, rising waters create an even more welcoming environment for the deadly pathogens.

Cultural confirmation is also a challenge. Not all isolates of the target species exhibit the same growth properties. Different isolates of the same species have shown as much as two logs differences in plate counts on TCBS plating efficiencies. This difference could be attributed to factors such as boiling time or depth of the poured media. Another challenge is that the Vibrio species might be subject to a biological phenomenon known as “viable but non-culturable.” When in this state, the pathogen is not able to be detected by traditional culture methods but is able to cause infection. A third challenge is that there are several atypical isolates of the target species, specifically for VP. Because of this issue, molecular-based methods, such as DNA sequencing, PCR-based methods, or matrix-assisted laser desorption ionization-time of flight mass spectrometry (MALDI-TOF MS) are good alternatives because they can confirm atypical Vibrio results, ultimately improving accuracy.