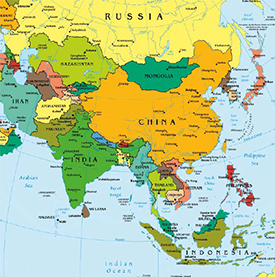 Spring rolls, satay, and sushi, these are just a few of the most familiar dishes in Asia, a continent renowned for having some of the best cuisines in the world. With fast-growing economies, a burgeoning middle class and complex supply chains, the countries in Asia face a growing array of food safety challenges. These are giving rise to innovative solutions and collaborative initiatives by governments and the private sector across the entire region.

“Food safety is a key issue for consumers in Asia,” says Matt Kovac, policy director of Food Industry Asia (FIA), a pan-Asia industry group with its headquarters in Singapore. “Over 70 percent of senior executives who attended our recent annual general meeting and leaders debate selected food safety as being the issue that will have the greatest impact on consumer preference in Asia in coming years.”

Kovac explains that the question was posed as part of an opinion poll conducted by FIA on April 16, 2015. “The topic of food safety polled considerably higher than other issues, including sustainable sourcing, genetically modified ingredients, health and wellness, and price,” he elaborates.

In a follow-up question, the audience chose cost of regulation and poor enforcement as the biggest barriers to growth for the food industry in Asia, Kovac continues. “These issues polled higher than things like access to technology, human resource capability, cost of raw materials, and route to market/poor infrastructure,” he says.

Not surprisingly, addressing food safety and harmonization of regulations feature prominently in FIA’s work plans this year. By serving as the leading industry platform for non-competitive debate in Asia, FIA aims to promote the value of self-regulation and public-private partnership as a cost-effective way of delivering wider benefits to society, Kovac says.

“We also believe in harmonized standards, especially in the context of food quality and safety,” Kovac relates. “By harnessing the technical expertise of our member companies, we work with appropriate authorities to accelerate the removal of trade barriers and promote the alignment of standards with international best practice.”

FIA was formed in 2010 to enable major food manufacturers to speak with one voice in Asia, principally in response to the region’s rapid economic growth and complex challenges in areas such as regulatory standards, food safety, and effective public health approaches.

To that end, the mission of FIA is to be a strategic partner in shaping the long term vision for public policies in Asia that promote sustainable growth and continue to stimulate investment and trade. The organization is currently funded by 40 member companies, who qualify for membership by having a regional or multi-country footprint in the Asian food and beverage trade.

According to Kovac, with new companies joining this non-profit platform every month, FIA has already established itself as the trusted voice of the industry in Asia.

Situated primarily in the eastern and northern hemispheres, Asia is the Earth’s largest and most populous continent, currently home to some 4.427 billion people. Though it covers only 8.7 percent of the planet’s total surface area, it comprises 30 percent of Earth’s land area, 17,212,000 square miles. Climates vary greatly, from arctic to tropical.

Asia is subdivided into 49 recognized sovereign countries, with two of them, Russia and Turkey, having part of their land in Europe.

Spanning some 3.7 million square miles, and boasting a vast and diverse landscape, China, officially the People’s Republic of China, is the world’s second-largest country by land area, and either the third or fourth-largest by total area, depending on the method of measurement. This sovereign state located in East Asia is the world’s most populous country, with a population of over 1.35 billion.