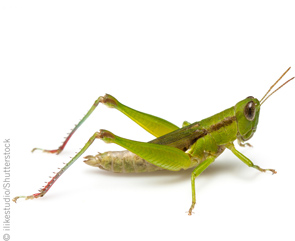 Even outside of reality shows like “Fear Factor,” entomophagy is a popular food source—from chocolate-covered locusts to roasted ants. Over 2 billion people are eating bugs of about 1,900 different species.

While entomophagy in the U.S. is low in comparison to other countries, there is evidence that bug consumption may escape its confined niche of novelty snacking. According to Persistence Market Research, the edible insect market is expected to grow rapidly—accounting for $772.9 million at a compounded average growth rate of 6.1 percent over the period of 2016 to 2024.

After the United Nations released a 2013 report which outlined the environmental, economic, and health benefits of entomophagy, U.S. food entrepreneurs have ran with the idea. Companies such as Entomo Farms, Six Foods, and Exo offer foods like granola bars, chips, and other recipes that utilize the nutrients which come from insects.

This has also inspired cooks, such as Chef PV who launched his own web series “Buggin’ Out,” which hosts entomophagy experts and recipes hoping to present the benefits insect-eating to a larger audience.

According to the U.N. report, insects have a high nutrient content of fats, protein, vitamins, fiber, and minerals: yet each species of bug differs in taste and nutrients, making some better for consumption over others. For example, on average, a cricket contains 72 percent protein, 16 percent fat, and 12 percent carbohydrate while also containing amino acids that are higher than meat and fish products.

“Demand for crickets and grasshoppers are increasing, owing to high ratio of protein. Legs and wings of these insects add an extra crunch in each bite,” Persistence Market Research stated.

According to the 2015 United Nations DESA report, the global population will reach 8.5 billion by the year 2030. This is expected to cause a decrease in food resources—ultimately leading to a high demand for other means of food.

Insects offer a healthy choice with lower capital investment compared to beef, pork, fish, and chicken. Nonpoisonous insects also have a low risk of transmitting zoonotic diseases, such as mad cow disease and the bird flu, according to Persistence Market Research.

An insect’s high nutritional value, easy harvesting, and low disease risk are vital factors that can contribute to a favorable growth of the U.S. edible insect market—that is, if it doesn’t bug people out.