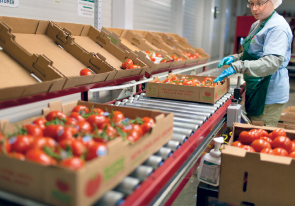 Backyard Farms employee provides a final quality check for tomatoes on the vine.

Backyard started in 2004 with the realization that the tomatoes in the grocery stores were grown in Canada, Mexico, or Holland, and weren’t ripened on the vine, and often not quite red in color on the store shelves. The company harvested its first hydroponic tomato crop in early 2007 from its 24-acre greenhouse in northern Maine, and added a second greenhouse in the summer of 2009 with another 18 acres of growing space. The total of 42 acres is equivalent to about 32 football fields.

The tomatoes are checked regularly from the time the seeds are grown at the external plant propagator through the shipment of the young plants to Backyard’s greenhouses, then at the greenhouses as they grow and are harvested, and through them then being boxed and shipped.

“Once the plants are in here [the greenhouses], they are monitored continuously by the growers,” adds Queenan.

Working in a hydroponic environment has its plusses and minuses. “There’s a clear advantage to having a hydroponic environment that is cement and steel enclosed with potable water systems in place to closely monitor quality,” he says. “We’re sticklers about handwashing.” The heated water system also is enclosed and can run at a consistent temperature. And there are bathrooms and plenty of sinks for employees to wash their hands, compared to an open field.

On the other hand, once the cold Maine winter sets in, the warm, moist greenhouse beckons a variety of insects, which need to be controlled. “You can’t afford to have an issue,” adds Cunniff. “It’s devastating.”

Backyard discovered that firsthand last July when a whitefly infestation forced the company to destroy all of its 420,000 tomato plants and start over, eventually not producing tomatoes for a total of six months. It cleaned out both of its greenhouses, delaying deliveries to some 30 retailers across New England, including Hannaford, Shaw’s, Roche Bros., Walmart, Wilson Farm, and Whole Foods for up to 10 weeks. In August 2013, the company deemed the new starter plants for a second crop grown at its external propagator partner to be inferior, and the company sought a new supplier. Backyard had to furlough all but essential personnel until after last Labor Day and then hired them back as the business got back on its feet. After fully cleaning the greenhouses and hiring van der Giessen as head grower, it got both greenhouses up and operational by October 2013, rehired all its employees by December, and then held a “new crop” celebration on January 8 of this year.

Cunniff remembers the ordeal as being horrible, but credits the hard work of the employees for helping the company turn around. “Going forward, one thing that is different is the level of diligence and the amount of monitoring,” he says. “There’s more time, more eyes, more feet on the ground. It’s a different level in terms of assurances now. You can’t fix what you can’t see and aren’t looking for. It’s both systems and people.” He says as a result, the company had the best January to March it’s ever had in terms of tons of tomatoes shipped.

Preparing plants in the greenhouse that will eventually help produce an estimated 26 million pounds of Backyard Farms tomatoes over the next year.

In 2013, the company invested in new technologies to improve the safety and quality of its products, including four Amerivap Corp. steam cleaners for its food contact surfaces on its packing lines. The packing equipment is not washdown and is extremely sensitive to moisture. The company has tested combinations of sanitation technologies that are low moisture and environmentally friendly.